Super quick one as almost all of my ‘free’* time is occupied with knitting A2’s festive jumper.  I have one sleeve to go…..  It’s been a labour of love so far but I think it looks pretty good.  I’m not sharing any pics until it’s all done though.  I feel like I’m trying to keep a lot of plates spinning and that they are all going to come crashing down very soon.  It’s A1’s birthday (and party) on Sunday so there’s been a bit of preparation for that and of course the obligatory birthday cake to make too.  More pics and a special 4th birthday post to follow too! But it won’t be too long until we are all at home for Christmas so hopefully by then I’ll feel a bit better and I can take some deep breaths and enjoy some family time.

This month has also seen A2 have an ear infection – which we only realised she had once the goo was seeping from her perforated ear drum and A2 had sickness bug and spent from 7-2am throwing up one evening followed by Mr.J having gastric flu at the weekend.

I also managed to get our big estate car stuck in a field in the dark in the middle of nowhere on the way to a WI weekend away with A2.  I took a wrong turn down a farm track, tried to turn around but as it was dark I didn’t realise I was turning into a huge pile of manure.  I totally panicked but all ended very well as a very kind man who lived nearby managed to pull me out with his pick up truck.  Phew!!

We did squeeze a proper grown up trip to the amazing Treehouse Cafe in though and managed to play a new game (Port Royal) and a game that me and Mr.J had played before (Evolution).  We just need to find some more willing babysitters so we can go again!

Movement:  A2 is still trying so hard to jump but her feet remain firmly stuck to the ground.  She does do a jump of sorts on the bed and the sofa though – going from standing to sitting and bouncing about! 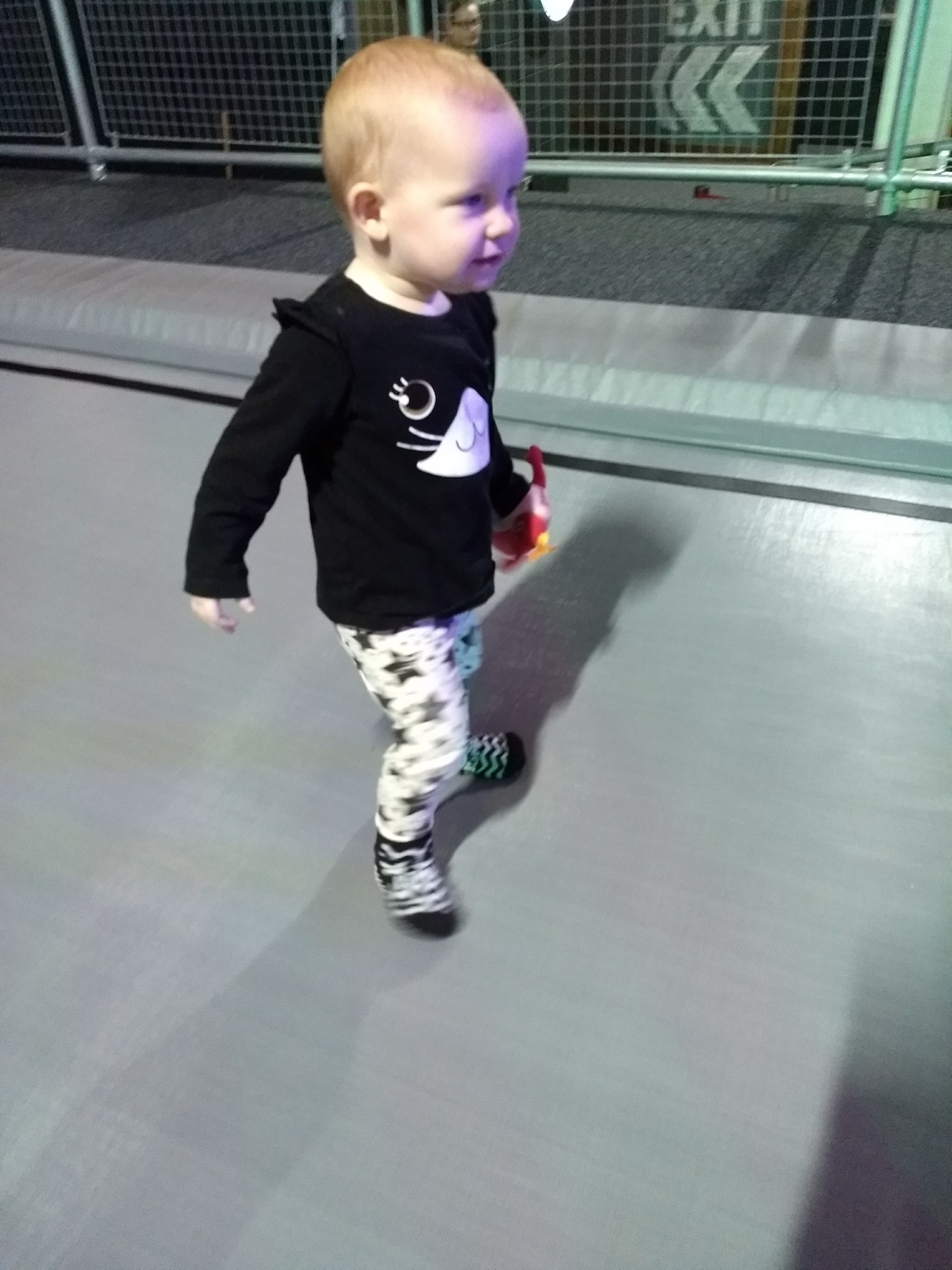 Eating: Lots of raisins recently as I am trying my best to offer snacks instead of breastfeeding in the day and it’s one of the few things that she will accept as a substitute.  Also dry cereal too.  Generally it feels like a lottery as to what either child will eat at the moment!  A1 isn’t even eating my sneaky 7 veg tomato sauce now and doesn’t eat as much fruit as he used to…. 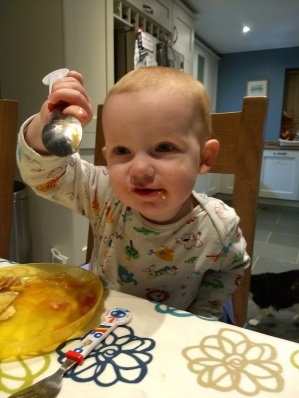 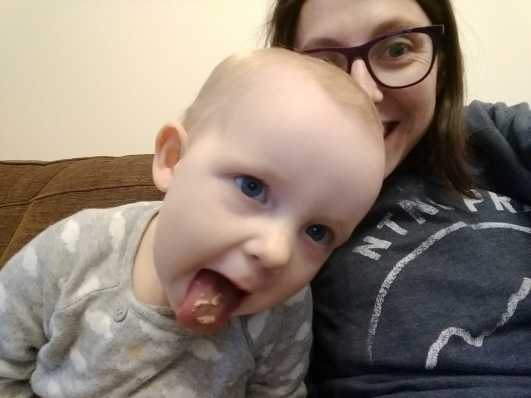 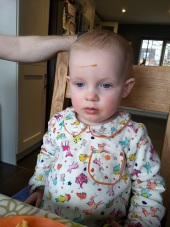 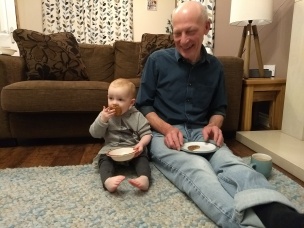 Teeth:  Still no new ones.  Though this weeks poos and red bum may be a sign of things to come.  Or not! 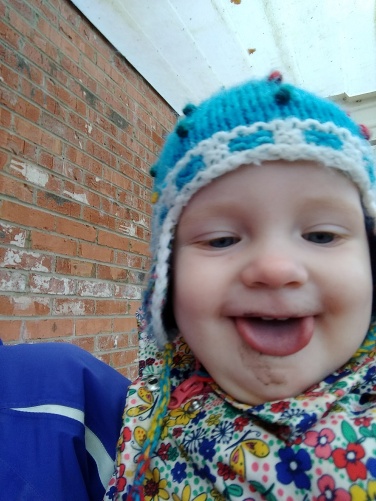 Sleep:  Ah. Sleep.  The thing which is eluding me most at the moment…. We are still generally managing 2 to 3 if we are lucky sleep cycles in the first stint regardless of whether Mr.J has done a boob free bedtime or whether I’ve fed her to sleep and at that first wake up she is not at all happy unless she gets fed.  It’s really draining.  I am wondering if it could be wind related as on the few occasions when I’ve tried hard not to feed her she screams for a while but eventually does a massive trump and the screaming stops briefly.  Once she’s in bed with us she seems more settled but she’s been waking pretty early recently too (so I’ve also had to endure the Ashes….).  It’s also made worse for both me and Mr.J as A1 isn’t happy self settling at bedtime now and is coming in with us anywhere between 11-1am so no one is getting much sleep…..zzzzzzzz….. 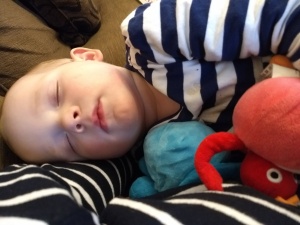 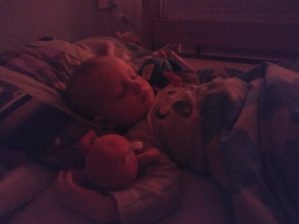 Playing: Her and A1 have been doing more playing together recently.  The tunnel has been out a lot and the Duplo and colouring in remain firm favourites.  Today at playgroup she led a group of 4 kids around pushing babies in prams which was quite entertaining to watch! She enjoyed the frost a few weekends ago and one of her favourite ways to pass the time when I am cooking is to empty all the plastic storage tubs out! 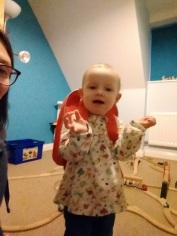 Communication:  Some important new sounds this month – ‘Yeaaahhh’ has been said a lot and often in a very soft and very cute way.  She is also saying ‘aaan youuuuuuu’ (thank you) lots now too – often when she passes you things so I am assuming she is saying thank you for holding things for her!  She is definitely getting much faster at learning new words and will often repeat things immediately.  Today VPM said ‘tasty’ and she said that back for example.

Special hair bonus:  It is growing.  Just slowly.  And it is a little bit ginge.

A1 is being hard work but I suspect my lack of energy is not helping me parent in the best way.  Here are some photos of the happy moments anyway! 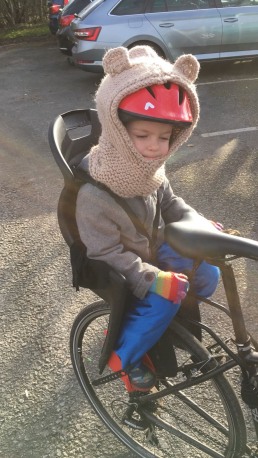 View all posts by Dr. JenkinSunts